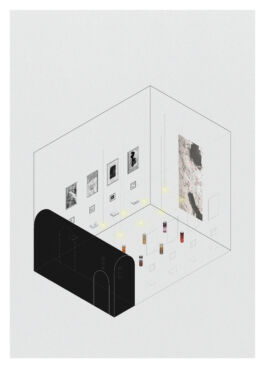 The word territory derives from the Latin word territorium, meaning the land around a town and terra (dry land and earth, as opposed to sea) and “specifically a Roman or a provincial city.”

In addition terra originated from the Indo-European word ters (dry, to dry). This indicates the very early exercise of city making (and the possibility of life) within the wet marshy land in Europe, while in Avestan ters transforms to taršna (thirst) and in modern Iranian it is used as tešneh (thirsty), (Nourai 1999) which means lack of water and thus what jeopardises the life itself, within the dry arid plateau of Iran.

In this sense, the ‘thirst’, both literally and metaphorically has constituted the urge and motive for searching the ways and means to inhabit the dry land, and to extract the hidden waters. This ‘thirst’ has made the incentives to invert the lacks and obstructions to new possibilities and creativity throughout the history. The qanat is a clear example of that.

This proposal for the Iranian pavilion of the 15th Venice Biennale of Architecture brings forward questions regarding the complex notion of thirst and its entanglement with geology, geography, climate, city-making, architecture, and detailing within the context of the Iranian plateau.